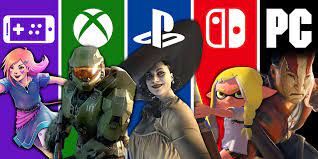 Kirby and the Forgotten Land
A new Kirby game, Kirby and the Forgotten Land is supposed to be coming out on the Nintendo Switch in March 25, 2022. For those unaware, Kirby games are platformers similar too Mario but with a twist of the main character a pink puffball named Kirby being able to inhale enemies to get their power. This game is a 3-D with a mouthful mode where Kirby attempts to inhale a vending machine or cone and gets special abilities, the cone allowing a drilling ground-pound attack while the vending machine allows you to shoot cans. We have also seen a few new abilities like a drill Kirby and one with a pop-gun. There is also a hub world (level select area and general shop type area) that allows you to upgrade the abilities, like bomb Kirby to chain bomb Kirby with bombs that link explode.
Mario Strikers: Battle League
This game will come out in June 10, 2022 to the Nintendo Switch. This is a soccer game with up to 8 players. So far, what I believe and have seen to be in the game starting with characters I know are in: Mario, Luigi, Wario, Waluigi, Peach, Toad, Yoshi, Rosalina, Donkey Kong, and Bowser. I think it is quite likely Daisy, Bowser Jr., and Diddy Kong.

The next few games have a more vague release date but should release sometime this year.
Splatoon 3
This new Splatoon game is planning to be released sometime in 2022. Salmon Run is a game mode where you fight off waves of salmon and steal their eggs. In Splatoon 3, it is coming with new bosses such as “Fish Stick” and “Flipper-Flopper” . This is also coming with a new egg toss mechanic allowing you to pass eggs to other player or even shoot it into the goal. It is also coming with a single-player story mode with a customizable fish buddy. We have seen a new bow type weapon and a few new specials.
Zelda Breath of the Wild 2
This game so far has shown off a flamethrower like weapon for Link and an ability that allows link to travel through upwards through a platform. There was also a camp of boko-goblins on a stone talus. These bokos had a single irregularly large horn.