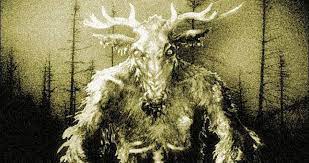 The wendigo is a fairly well known creature that is described to  look emancipated, with eyes pushed deep in their sockets, and grey. Some think of it as a monster with human characteristics or a spirit possessing a human making them look terrifying and others say it is people who are cannibals (eat other creatures of the same species in this case other humans) and because of these practices metaphorically (or in some myths literally) monsters. The wendigo is said to have eaten human flesh and the multiple names is add roughly translate into “evil spirit that devours mankind,” and is associated with winter since then is when food runs more scarce. The occurrence of the creature in myths increases when the Europeans arrive and force them off their land pushing them from somewhere they know where to hunt to a new place they know a lot less about causing starvation which leads some to become cannibals to survive. The wendigo was also a kind of warning against overconsumption which is what the Europeans where doing constantly taking land and resources they didn’t need. The Europeans also came up with this wendigo psychosis to dehumanize the Natives saying they just suddenly have a craving for flesh and might be able to resist it but still wanting to eat “you”, generating fear towards the Native Americans.
Stories of Wendigo
A tribe of people mad a call for warriors to dispatch of some cannibals among them, and a strong stranger named Anwe accepted the call. He watched the village looking for a suspicious group, and found a large clan of an old man, his wife, and their 7 sons. At first they seemed to be ordinary people, fishing and hunting as usual. But Anwe knew that cannibals don’t only eat humans, but would act normal until the craving comes. Then they capture and eat someone acting as if it was just a regular meal, so Anwe waited watching them and decided the old man was the weakest. Anwe used his powers to make himself look frail, Anwe tells the old man of a plan to catch beavers and they both agree to meet again at dawn. The old man tells his family about the encounter but his sons are suspicious. Still they proceeded with the plan, after they catch the beavers they send the sons to get sticks and Anwe proclaims he is thirsty and leans down to drink some of the water. Anwe says the man must be thirsty too so tells him to drink, and when the old man does so Anwe impales him with the pick and tosses him in the water. The old man’s sons could tell their father was dead and rushed to the beaver den, but Anwe place each of the sticks at different distances so they came one at a time. He proceeds to kill them and then the 2nd youngest arrives who is truly wendigo like, the brother hurls sticks at Anwe but Anwe dodges and shoots him with arrows saying “Feel what you made the people feel!” with every hit till the brother collapses. The youngest brother begs for mercy but Anwe doesn’t since he gave no mercy to those he killed. The old man’s wife returns with a meat tenderizer and 7 servants and wifes of the sons and asks where her husband is, and realizes Anwe killed him. She throws the mallet at Anwe but he dodges and splits her head with a rock. He then kills the wendigo woman among them and burn their hearts with fire until the ice melted.